Making her appearance at the end of episode 5 of

is the ex-wife of Burke, and mother of Fathom and Heathen, the one and only Texas Simmington. Marrying at an early age to Burke, Texas was very much in love with her entrepreneur husband as he was with her. They had been introduced to one another through Burke’s,then best friend, and business partner, Cyril 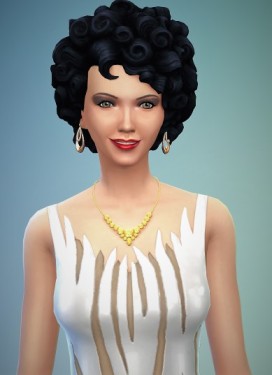 Dolby and his then wife Skankie. Initially the attraction between both Burke and Texas was electric. Both were eager to progress and be successful in life and had the hunger and drive to do so. The first couple of years of their marriage was successful but when Burke became focused on growing his business to be the best in the world it meant long trips away from home and Texas soon began to feel abandoned. Inevitably she turned her attentions to the many male admirers she had and began her countless affairs behind her husband’s back.

Texas loved her children she had with Burke very much but she always wanted more from her life than to be the trophy wife of a successful businessman. She tried making a name for herself in the arts world by studying painting but she soon bored of that. What she wanted was power and to be a successful business woman in her own right. And when her husband’s business rival Cyril started to woo her behind Burke’s back she flung herself full on into the affair partly out of loneliness but more so out of how it could be advantageous for herself. However it wasn’t to be as Burke returned early from one of his frequent long business travels only to find his wife in bed with his rival. From that point Cyril became Burke’s nemesis and he threw Texas out of their mansion.

Texas was publicly humiliated by the scandal of the affair. The upper circles of society that she was used to frequenting in were supportive of hard working Burke and turned their backs on Texas. Even Cyril stopped seeing her as he tried to save his own marriage. With no friends, home or money Texas reluctantly accepted the proposal from Burke – that he would pay her a large sum of money in instalments over several years as long she divorced him, left Windenburg and never had contact with him or their children again. And so Texas left and stayed away for many years. She has spent the time away traveling the globe indulging in many illicit affairs but more importantly learning a lot on how to perfect her ruthlessness.

Upon reading in the gossip columns of society magazines that her ex-husband was to marry his former secretary Texas decided at that point to return to Windenburg and settle a few scores. She wants her revenge on Burke and everyone else who turned their backs on her and will stop at nothing until she gets it.

Age: A lady never reveals her age! But we know she is an adult Sim.

Career : None at present but she is a woman of many hidden talents.